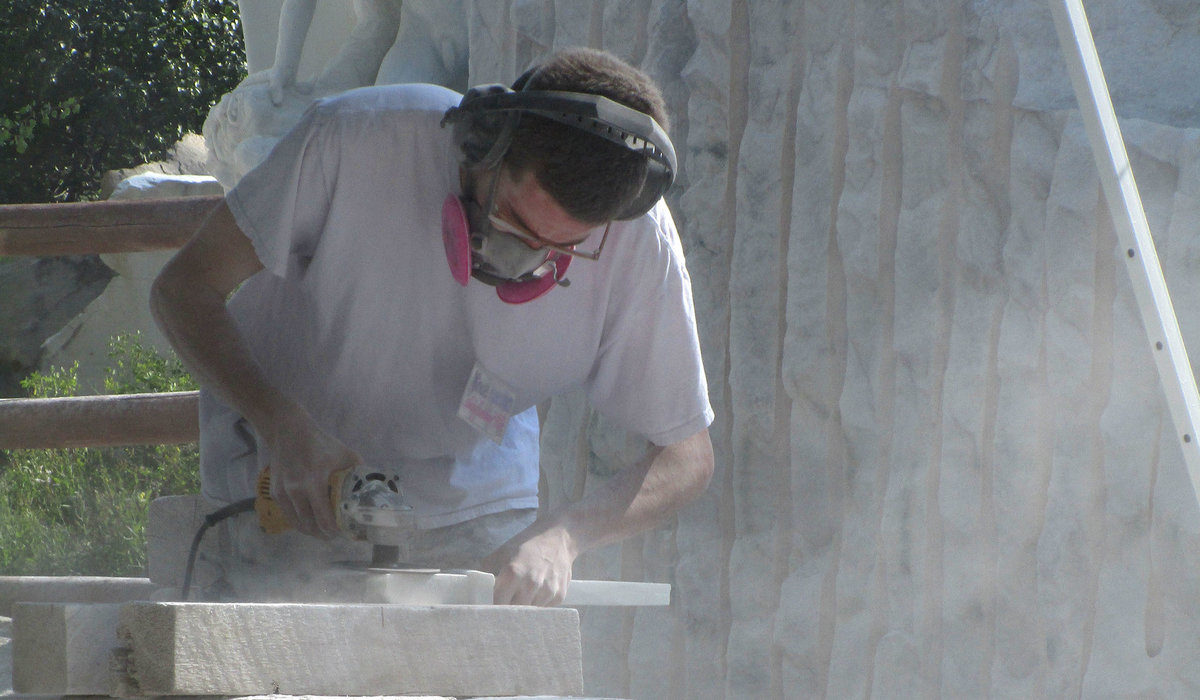 As seen in Roaring Fork Lifestyle

“I owe the sculptor I am to this place and this woman,” says Nathan Slape, gesturing to Madeline Wiener. A slender, silver-haired bolt of energy, Wiener has momentarily come to rest, settling like the marble dust coating all the aspens in camp. There’s emotion in Slape’s voice as he stands before the wrap-up meeting of the annual marble symposium in Marble. “I first came here 13 years ago on a college scholarship. I didn’t know what it was going to be. I just went to this crazy place and they taught me to sculpt stone. Fast, efficiently.”

Marveling that this marble salon has completed its 29th summer, Wiener reflects, “I love seeing all the old folks—many people here have been coming for years. But I love seeing the young folks; they are our future.”

This gathering, affectionately called “Marble/marble,” has launched careers, drawn artists the world around, sparked romances and marriages, even led to second-generation sculptors.

Wiener’s son Joshua is one of those. He now lives in Boulder, has instructed at the Art Students League in Denver, and has taught workshops at the Denver Art Museum and the Colorado Academy. He also teaches here at Marble/marble. “This place attracts sculptors and facilitates them doing this for a career,” he says. “Everyone who comes here leaves further along their trajectory as an artist, wherever they were to start. Mother’s stripped-down approach to teaching is a model for sharing freely. There are no secrets, no competition. It’s a supportive community, not everyone fighting over one piece of cheese.”

Among the features that make Marble/marble so special, in addition to its spectacular Crystal River setting, are the open sharing, the camaraderie, and the opportunity to learn alongside world-class sculptors drawn from countries across the globe: Japan, England, India, Mexico, and Israel, among other places. Marble/marble offers a fully-equipped outdoor carving site, daily classes, and unlimited use of symposium tools. Participants receive a block of beautiful Colorado Yule marble, donated by R.E.D. Graniti, the Italian company that now operates the historic quarries in Marble.

Judy Fox-Perry, a rancher who lives near Carbondale, has been coming to Marble/marble for roughly 10 years. Reviewing small foam model, a “maquette” she has constructed, she weighs whether to include the interior antler ridges characteristic of mountain sheep. Fox-Perry notes that those rings are added annually, like tree rings. “I took a trip to the Department of Wildlife to check out the horns. I have mostly chosen the marble and created the horn the way it is now because I like the stone’s veins and colors. But the horn has a double curve that has got my mind in a kind of knot.”

“Artists really can’t be alone in the studio all the time,” explains Wiener. “We need feedback from other artists. When push comes to shove, I need the energy I get from all these people. The original premise was to carve with friends. Sometimes I get so busy I can’t do that, but I benefit from meeting all these people, the food, the music, the cultural diversity.”

The spark for Marble/marble was lit during Marble’s Fourth of July celebration in 1977 when Wiener watched Scott Owens, Frank Swanson, and Gregory Tonozzi carving a single marble block together. Years later, when Weiner was waxing nostalgic about sculpting in community, a friend challenged her to “make it happen.” She did. In 1989, the Art Students League of Denver, where Weiner was an instructor, agreed to lend its name to a summer workshop she developed along with fellow sculptors Greg Tonozzi and Scott Owens. Gerald Balciar was a guest instructor that first year.

Thinking the single-session gathering was a one-time experience, Weiner cried when it was over.

But the fire had been lit. Participants wanted more: a second year, a third. One session became two, then three. Every year, Marble/marble holds three sessions on the same dates in July and August. Next summer, Marble/marble will mark its 30th anniversary of creativity, community, and changing lives.

As Marble/marble 29 participant Kristyn Kloeckner wrote on the institute’s Facebook reviews, “You will always find great food, amazing art, and the most beautiful people you could have in your company…This isn’t just a place to carve stone for the summer—get ready to fall in love and have your life changed forever!”